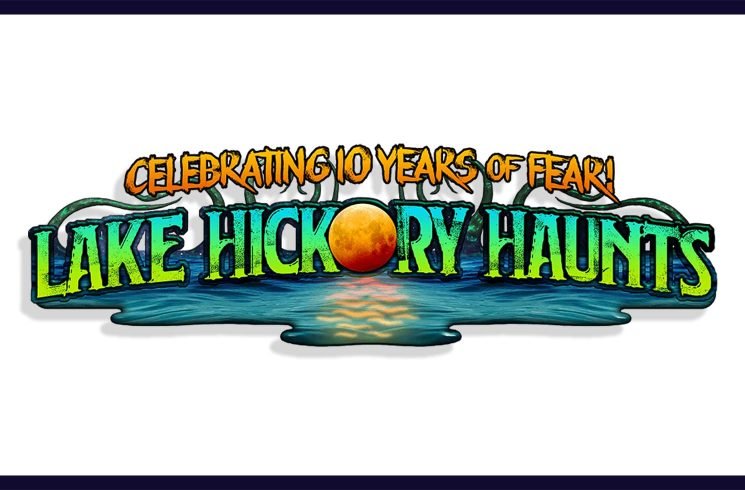 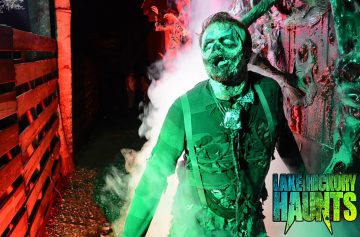 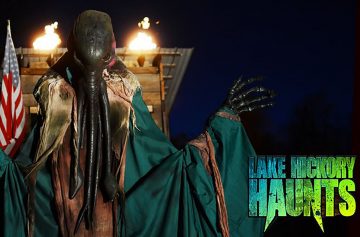 Dr death & his evil nurses have created a serum called nr2. The fluid took the most terrifying experiences from victims & combined them into a physical slime. You will be showered by nr2 upon entry. The fast acting liquid turns fear into reality. No safe word, No escape. Horrifying hallucinations await in the nightmare factory. Undead souls wander endlessly in despair. They will do anything to come back to life and escape the nightmarish realm of blackness that is their eternity. You are the last chance for these evil spirits to come back to life! Will you make it through alive or become trapped in the lair of the undead? 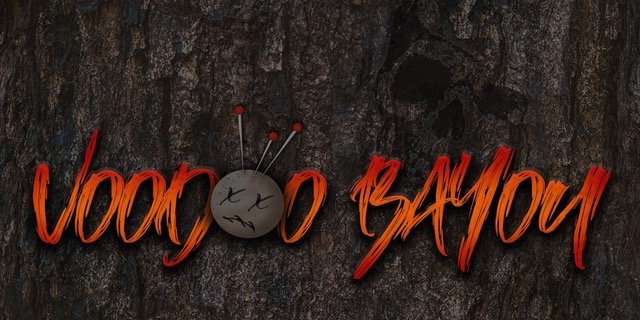 ALL NEW FOR 2022: A tribe of Voodoo Witch doctors live in the treetops on the bayou. Among them you may encounter the infamous Papa Legba and Marie Laveau! Be cautious – No matter who it is, they can’t be trusted! The power of their witchcraft and sorcery is not to be reckoned or bartered with! Their sly and cunning ways are so convincing… sometimes it’s impossible not to give in to their tempting smiles and deceitful tricks. Don’t make the mistake of trusting a witch doctor in the voodoo village by the bayou, or you may lose body part(s), be turned into an animal, or boiled alive! Watch your back when you encounter Voodoo on the Bayou at Lake Hickory Haunts!

* Warning: Voodoo on the Bayou is a “treetop maze”, in which guests walk through a maze at an elevated height of approximately 15-20 feet up in the air. If you have an extreme/serious phobia of heights, we recommend that you ask a staff member to skip this attraction (before you begin your tour). *

ALL NEW REVAMP FOR 2022: On a dark and stormy night many years ago, a crew of pirates were sailing near the shores of Lake Hickory Haunts. As the pirates approached the shore, the storm intensified, until suddenly, a massive kraken erupted out of the water, devouring the entire crew of pirates, and demolishing their ship! Afterwards, the storm ceased, and the waters were calm. Until one night, many months later, a massive cyclone formed in the water! Suddenly, a ghastly pirate ship sailed out of the cyclone, full of the same crew of pirates… except now, they were soulless, ghostly versions of their former selves.

Now, this crew of vicious and undead pirates has laid claim to a part of Lake Hickory Haunts. Out for vengeance, they will destroy, loot, and lay claim to anything or anyone they see! Beware, these pirates are not to be bartered with! Can you survive Shipwrecked 2.0, or will you be made to walk the plank and suffer an eternity of pain?

In 1931, not long after Lake Hickory was created, a fishing village located along the banks of Lake Hickory was prosperous. Too prosperous, in fact. While the village grew more successful and productive in their fishing efforts, the lakes ecosystem and its water-life diminished. Obsessed with wealth, the fishermen of the village caught, sold, and consumed more and more fish, while dumping more and more waste into the water. Until one day, the tide was turned…

Furious with the gluttonous villagers, a water demon known as Vodyanoi had his revenge. Vodyanoi destroyed the village dam, causing the city to flood and eventually sinking into the depths of water. During the flood, the malevolent demon dragged many villagers down to his underwater dwelling to serve him as slaves.

Now, 89 years later, the village has risen from the depths. It is said that the village and surrounding water is the most demonically possessed location on Earth. Rumor has it that the city is plagued with death, famine, and unexplained water disasters. Surrounding the sunken village, you may encounter seductive sirens, monstrous sea creatures, possessed fisherman, floods, and worst of all… Vodyanoi.

ALL-NEW REVAMP FOR 2022: A powerful and superior alien hybrid has risen from the unknown abyss below Lake Hickory! Its name is Kluath. Its goal: World domination by means of genocide of the human race! The beast is conducting monstorous experiments in its sea laboratory, using humans, sea creatures, and other monstrosities to form a mutated army destined to destroy mankind. Kluath’s power can not be stopped! Become a part of Kluath’s killing machine, or face extinction! Those who survive Extinction must inhabit the city of Aftermath, a post-apocalyptic city with a giant territorial wall surrounding it. Using busses, cars, metal, and anything else they can get their hands on; survivalists have built a small city surrounded by walls to protect themselves from outside threats. Aftermath is populated by those who have survived Extinction. Tread lightly! The inhabitants of Aftermath are extremely aggressive and defensive. In a world of limited resources, these survivalists will do whatever it takes to survive! Anything and anyone that doesn’t live within their walls are a threat to their survival. Using guns, man-made weapons, and tools; these once civilized humans are now a force to be reckoned with! Hidden behind a filthy sewer, an underground cave contains many secrets, treasures, and horrors! Within Descent, victims encounter awe-inspiring water caverns, rock formation caves, darkness, and much more. As you descend into Descent, you will quickly realize you’re making your way into a legitimate *underground* cave system. Soon after, you realize that the horrid sewer was in front of the cave system for a reason; To hide the cave systems from human contact! Upon first sight, the caverns and caves are wondrously beautiful to gaze upon. However, further exploration reveals that the horrors and predators lurking throughout the depths of Descent are far worse! Prepare to explore the depths of the beautifully treacherous cave systems within Descent! If you see any creatures lurking throughout the caverns, stay silent and get away! Oh, and if there are any cave collapses… Descent will be your grave.

Descent is truly an underground attraction. When used, the words “cave” and “underground” should be interpreted literally. If you have a legitimate unmanageable phobia of being underground or of cave systems, please see a Lake Hickory Haunts customer management representative so we may assist you in bypassing this attraction. Boss the clown brings new meaning to the term evil clown. He has one goal, turn everyone into mutated clowns by sinister science. Boss uses the circus to lure victims into his laboratory. Once in his power, boss begins the human to clone process. The terror, madness, & agony that await within are beyond compare! You thought you were afraid of clowns, not a chance. The “grand finale” of nightmares! The Mangler is a death machine with one purpose: To mutilate and destroy all who enter. If you’re lucky enough to survive the rest of Lake Hickory Haunts, the Mangler will be waiting… and the Mangler never fails. 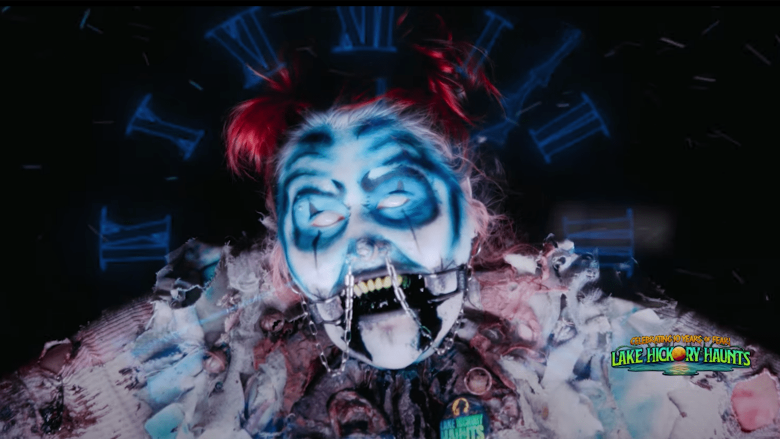 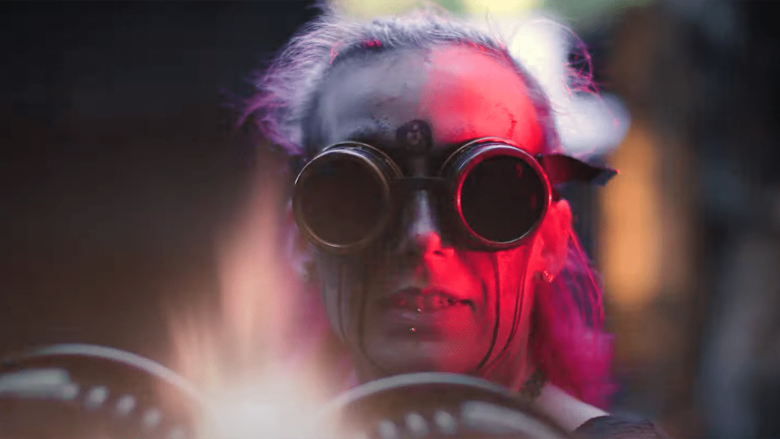 AFTERMATH
Get Directions
Get Updates